We have been investigating the first three of the Five Aggregates, those ways we experience life that we typically mistake to be who we are. So far we have looked at material form, in particular our body; feeling tones, i.e. our likes and dislikes; and cognition — the way we process information, the body of knowledge we accumulate, our natural talents or the skills we develop.

The Buddha talked about the Five Aggregates as a magic show* you might find on the road. I just saw the movie Oz, the Great and Powerful, a tale in part about how much we want to believe in smoke and mirrors.

Movies themselves are tricks, the magic of light through frames of film flickering to create a sense of continuous movement. The first time anyone saw a movie on a big screen, it is said that the audience jumped up and began to run away when it looked as if a huge train was coming right at them. When they realized it wouldn’t come off of the screen, when they began to understand the concept of ‘screen’ and ‘projection’, they didn’t leave the theater disgruntled that it wasn’t real. They didn’t ask for their money back. They settled down in their seats to enjoy the thrill. Knowing it was a kind of magic made it all the more fun.

And isn’t that true with life? Doesn’t the fact that seemingly solid objects are not what they appear actually make life more interesting and less frightening? The world looks completely different depending on what lens we are looking through: the naked eye, the magnifying glass, the telescope, the microscope, etc. At each level we see a new world. Here are three examples:

Before microscopes showed the existence of bacteria, the medical community scoffed at the idea that hygiene was important to keep patients from contracting lethal infections. When it became common knowledge, the idea that there is all this microscopic aliveness going on everywhere was unsettling and it has taken a while to recognize that it’s okay, that not all microscopic life is bad. Much of it is important to our own health.

When we saw photos of the earth from space for the first time, it expanded our idea of reality and changed how we thought of the earth, inspiring us to take better care of it. We accept new views and develop the facility, the elasticity of mind, to handle these expanded views.

When through computers the world became broken down into patterns of zeros and ones, it busted open a whole realm of possibilities. Looking at a digital photo on the computer and zooming in, there is a point at which we actually see the edges dissolve, the little blocks of pixels in a variety of shades of colors looks more like a crowd scene than the edge of a face of someone whose ill-timed pimple we are kindly removing with a poke of a digital paint brush.

So we expand our understanding of the world and in doing so we begin to see that reality at any given moment truly is a collective hunch, our best guesstimate at this time, given the abilities and technologies we have at this time.

To see through a new lens in a new way can be frightening, like the train seeming to come off the theatre screen was frightening, but it is only our fear of the unknown, ingrained in our instinctive brain. Fight or flight kicked into action. When we are able to see more clearly, expand our understanding, then we are no longer frightened, but exhilarated. What a world we live in! How great to be fully present in this moment to experience it!

Let’s go back to the story of the Wizard of Oz we are all familiar with, where each character feels he or she is are lacking something — a brain, a heart, a home, courage. They follow the Yellow Brick Road. They’re ‘off to meet the Wizard’ who will give them what they lack. They go through a lot of challenges. They are truly on a quest.

In the end — spoiler alert! — the Wizard is just a magician behind a curtain with some mechanical tricks, not the looming booming ferocious-looking face that had them trembling in their shoes. 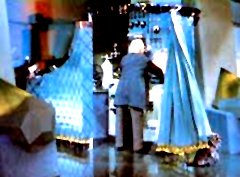 Who is it who reveals the truth? Toto! Dorothy’s dog, who until that moment seemed just a cheerful tag-along character, probably included so Dorothy would have someone to talk to before she came upon the other characters. But now it turns out that Toto, who was never on a quest, never in search of anything, just happy to be in the present moment, is the one that sees clearly in that moment of their great distress in front of the Wizard. Toto pulls back the curtain to reveal a simple human trying to make a bigger than life impact.

All the other characters had been searching high and low, taking advice from all and sundry on where to go and what to do in order to reach their goals. Toto didn’t need to search for anything. But he was alert and present enough to sense there was something behind the curtain.
Dorothy, the Tin Man, the Scarecrow and the Lion all feel a terrible disappointment when they see that the Wizard of Oz is just a little man behind a curtain. All this struggle and they are no closer to the goals they were seeking. Who could blame them for being frustrated or angry?

But then it turns out that once he is out from behind the curtain, the gentleman from Kansas is able to offer a little wisdom: The reminder that none of them are lacking for anything. The Scarecrow had shown he was quite smart. The Tin Man had shown he was capable of great love. The Lion had exhibited great courage. Even Dorothy who misses her home has not been lacking for family on her journey. And it turns out she had the key to return home on her feet the whole time. She just didn’t know that all she had to do was click her heels.

Click your heels right now. What do you notice? Awareness of physical sensation that brings you fully present. You are home wherever you are, as long as you are fully present and cultivating compassion.

When we are present and cultivating compassion, we can enjoy engaging in the world, even if it is no more solid or substantial than the Land of Oz. Just as we can enjoy movies even though they are not real, we can enjoy the experiences of our perception of the world around us, and yet at the same time be open to the possibility that it is not all exactly as it appears.

When children cease to believe in Santa Claus, there may be sadness and a desire to continue to believe, even though it’s causing suffering because kids are teasing them. We might tell them that while it is true that there is no substantial permanent physical Santa that magically squeezes his generous girth down chimneys all over the world in one night a year, there is the spirit of generosity that Santa embodies. We cultivate that sense of generosity within ourselves, so in a way we are each of us Santa. Isn’t that more magical? More fun? More inspiring? More empowering? We each have within us the capacity to make the world a kinder gentler place because we are deeply interconnected and a change in our way of being shifts the whole world.

This is also the way we can explain to ourselves how we can live in a world where nothing is quite as substantial, solid or nameable as we thought it was. We look at how our attachment to this tidy little idea makes us suffer. We suffer because we cling to it, long for it, mourn it, resist it, blame it or vilify it. We have all sorts of strong reactions to it that are just various forms of suffering.

If we can hold it in a lighter, more spacious way, a way that doesn’t have to be tied down and locked up, we can celebrate a lightness of spirit within ourselves. We can feel liberated from that powerful need to know. We can dance in the ‘I don’t know’ mind. That’s the gift of understanding that it is all a magic act or a moving picture. It doesn’t make it meaningless. It makes it a pleasurable gift that doesn’t send us into reactivity.

This is true with each of the Five Aggregates. Cognition identifies, collects, sorts and organizes sensory input. If we enjoy the process without attachment, without needing it to be permanent, solid and governable, then we are free!

So when we grasp and cling at this illusion of self in the form of any one of  the aggregates, we are following the yellow brick road instead of simply clicking our heels, being fully in the present moment, awake, aware and able to enjoy engaging in the collective creative illusion that is this wondrous gift of life.

In our class discussion, the idea of quest or path was brought up, including the idea that Buddha was on a quest and promoted a path.

As I see it, It was when the Buddha stopped questing, recognized the futility of such a quest, and simply sat down under the Bodhi tree with intention and clarity of mind that he became enlightened. And although he suggests the Middle Way, it is more ‘way’ in ‘a way of being’ rather than a yellow brick road with a destination. The Buddha was concerned with suffering and the end of suffering. There is great suffering in thinking that our happiness is elsewhere and that we must crawl on your hands and knees across a desert to get there.

Stop questing! Start sensing in to physical sensation. Open your eyes and be here in this moment. This is the happening place! A place of delight we hold lightly, knowing that all is an illusion, a great magic show. Enjoy!
*The Buddha is said to have used the analogy of a magic show for just one of the Five Aggregates, consciousness, but I have taken the liberty to refer it to all, since they all have similar characteristics.